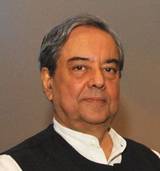 Ashok Khosla is Chairman of the Development Alternatives Group, a consortium of social enterprises based in India whose mission is to create technologies, businesses and markets for large scale generation of sustainable livelihoods.   He is also co-Chair of DESI Power Pvt Ltd, a company dedicated to delivering energy services to village communities in rural India.

Earlier, he was Director of the Office of Environment, Government of India, and then Director, Infoterra in the United Nations Environment Programme.

He is currently President a.i. of the Club of Rome and has been a Member of the Governing or Advisory Bodies of the World Economic Forum in Davos, IUCN, WWF, IISD, the Stockholm Environment Institute, WETV, EXPO 2000 and several other international organizations.  He was Special Advisor to the Brundtland Commission and Chairman of the NGO Forum at the '92 Earth Summit in Rio de Janeiro.

He has been board member of many government, industry and NGO bodies in India, including the National Security Advisory Board, the Science Advisory Committee to the Cabinet and the National Environment Council.


Ashok Khosla studied at the Universities of Cambridge and Harvard.  He was awarded the Stockholm Challenge Award in 2002, the UN Sasakawa Environment Prize in 2002 and the Schwab Foundation's Award for Outstanding Social Entrepreneur in 2004.