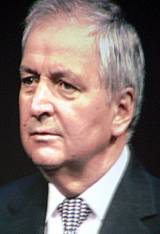 Klaus Töpfer (born 29 July 1938 in Waldenburg (Wabrzych), Poland (then German Silesia)) is a German politician (CDU) and environmental politics expert. From 1998 to 2006 he was executive director of the United Nations Environment Programme(UNEP).

Töpfer studied economics in Mainz, Frankfurt and Münster. In 1968 he earned his doctorate at the University of Münster. After functioning as government official, professor and adviser on development politics he became minister for the Environment and Health in the regional government of Rhineland-Palatinate in 1985. In 1987 Töpfer became German Federal Minister for the Environment, Nature Conservation and Nuclear Safety under Chancellor Helmut Kohl. From 1994 to 1998 he served as Federal Minister for Regional Planning, Civil Engineering and Urban Development. He was member of the Bundestag from 1990 to 1998 and member of the Steering Committee of the CDU from 1992 to 1998.